Skip to content
Previous Next
Can Botox Actually Improve your Mood? 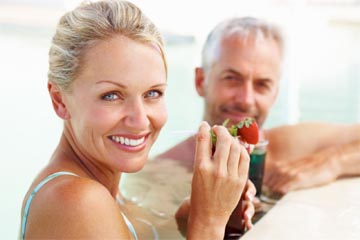 According to a recent article in Medscape, studies have shown that when Botulinum, also know as Botox,  is used to relax frown lines, it can actually relieve major depression.

According to the March 2012 article,  “a single injection of botulinum neurotoxin into the glabellar muscle of the forehead to relieve frown lines appears to lead to strong and sustained improvement of the depression.”

Tillmann Kruger, MD, Associate Professor in the Department of Psychiatry, Social Psychiatry and Psychotherapy at Hannover Medical School in Hannover, Germany, reported at the 20th European Congress of Psychiatry that these findings support the concept that facial musculature not only expresses mood states but also affects mood.

“The theory is pretty old, and it says that many or most of the emotions we have develop somewhere in the brain, and some of them are expressed in your face, for example…and this is again received and sent back to the central nervous system by this proprioceptive feedback,” he told Medscape Medical News.

Botulinum toxin, otherwise known as Botox, is a popular non-surgical injection that can temporarily reduce or eliminate frown lines, forehead creases, crow’s feet, and other unwanted facial lines. Botox is effective because the toxin blocks nerve impulses, which temporarily paralyzes the muscles that cause wrinkles. The result is a refreshed and youthful appearance. The effects of Botox have also been proven to relieve migraine headaches, excessive sweating, and muscle spasms in the neck and eyes.

To find out if Botox is right for you, contact the COSMED Plastic Surgery Center to schedule a consultation with a board certified plastic surgeon or dermatologist.

About the Author: Webmaster